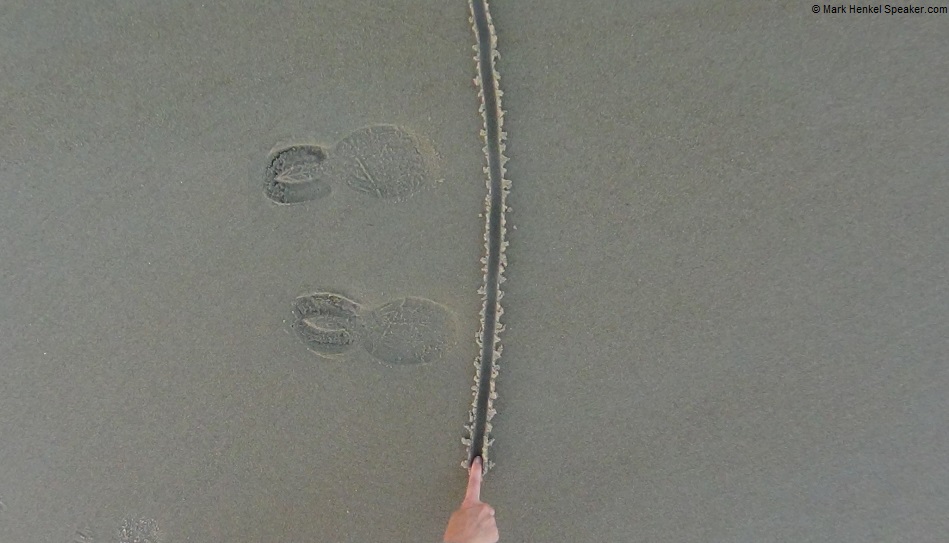 Part 1 of SERIES:  “Speaking for Free” is a Dirty Word!

Speakers Now Draw The Line in the Sand

This article is the first installment in a series, to forewarn all event/meeting planners to never again use a specific phrase when asking Professional Public Speakers to work.

It’s not rocket science: when people work, they are paid. When you seek a professional plumber to do work on your plumbing, you would never ask them, “Will you please work for me for free? I will tell all of my friends. It will be great exposure for you.”  Rather, you know that you would have to pay the plumber.  Moreover, you also know that, if you even hinted at asking that question, the plumber would not even give you the time of day.  This expectation of fair exchange in honest free market capitalism is true in almost every field and industry.  But when it comes to the business of curators and event/meeting planners who seek the work of Professional Talent, too many pretend that this expectation does not even exist.

Professional Talent of any form – including Public Speakers, Writers, and Musicians – are mad as heck about this and we are not going to take it!   When we as Professional Talent get asked  to work for free, we just might react as one Professional Writer demanded in a profanity-laced video, “Pay Us!”  (Some of us just might not say it with such vulgar vernacular.)

Professional Public Speakers have high-level talent that we have worked hard to perfect.   Asking us to be “speaking for free” – so that someone else may make money off of our Talent and hard work – is absolutely one of the biggest reasons why a Professional Public Speaker will loathe an event planner.  (Note: in case you read that last sentence too quickly, “loathe” is definitely not love.)

It is true that there are variations which might seem to be a “grey area.”  For example, Speaker Showcases  might possibly provide an opportunity for a Professional Speaker to compete against similar speakers for a later paid speaking gig.  UnConferences are another example, but these can be too uncontrolled for high-level professionals to feel comfortable having their brand being next to lesser-levels of quality speakers.

Neither of these is so much a “working gig” as each is a pitch-opportunity to try to get the gig.  Even so, when speakers are asked to pay just to participate in these “opportunities,” it can very often be only the event planner’s organization that is making any money.  Moreover, the very notion of pay to work (aka, as “pay to play”) is very rarely something anyone with high-level Talent is inclined to want to be doing.

In August, 2014, the NFL initiated an outrage by expanding this concept to an even worse idea than “Pay to Play.”  Not only was the NFL not going to pay the Professional Musical Talent to work at the Super Bowl Half-Time Show, but the NFL wanted to be paid by the performer(s).  It gets worse: the NFL actually wanted the performer to pay a share of all their future gigs at other shows that the Artist would subsequently perform elsewhere on-tour after working on the Super Bowl Half-Time Show.  This notion was the height of arrogance – especially because the reason why the Half-Time Show acquires such a huge audience is precisely because of the Talent who attracts even more audience (who would not otherwise have watched the football show at all).

Although the situation was about Professional Musicians, this still elicited an outrage among many Professional Public Speakers.  For that matter, it is an outrage which may very likely extend to high-level professionals from all other Talent industries too.  For Professional Public Speakers, this concept went beyond “speaking for free.”  This even went beyond the more offensive concept of “pay to play.”  Jaw-droppingly, this had the outrageous audacity to suggest that any Professional Talent should be required to pay percentages from future profits beyond the gig itself.

For Professional Talent industries, that outrage crossed a line which had not yet been formally drawn.  Hence, Professional Public Speakers now do draw that line in the sand, to say, “No!”

Let no event/meeting planner cross this line again.  From henceforth, that line is simply this: the phrase “Speaking for Free” is a dirty word.

This is the first (1st) installment in this series.

SERIES: “Speaking for Free” is a Dirty Word!

Future installment(s) of this article-series will add some personal anecdotes demonstrating why “Speaking for Free” is now a dirty word for Professional Public Speakers, will explore creative methods to obtain compensation though means other than direct financial payment, will address how to protect legacy issues for those who used to use the phrase in eras gone by, and will provide ways to use specific adjectives to describe situations which could legitimately not involve compensation (e.g., “Donation Speaking”). Be sure to check back for such installment(s).

Follow me on LinkedIn at any/all of these links:

Also published in Pulse at LinkedIn, Speakers Now Draw the Line in the Sand.

One thought on “Speakers Now Draw the Line in the Sand”