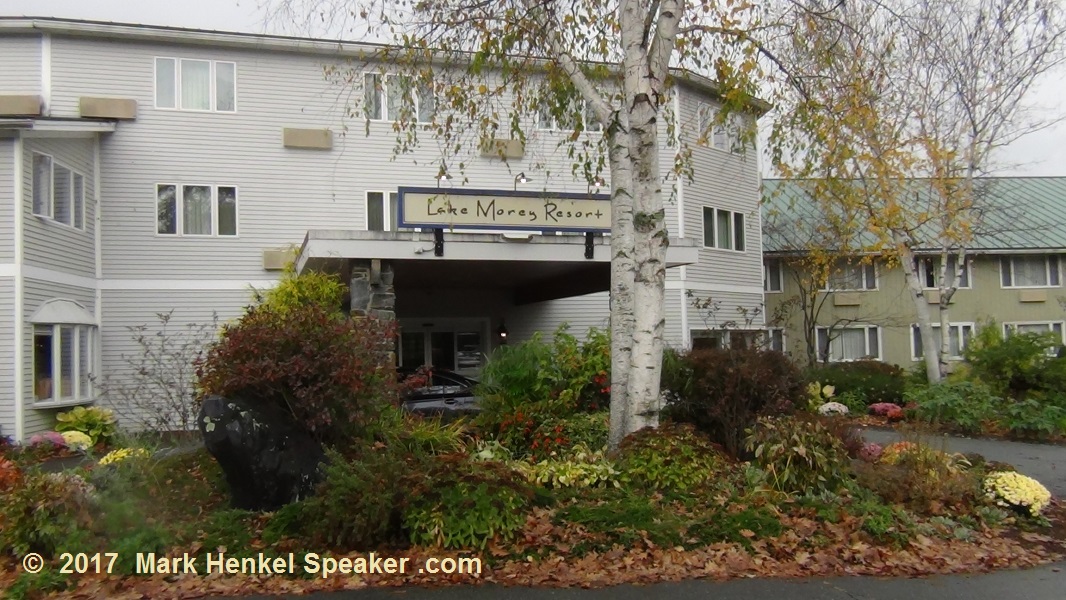 I attended the 2017 District 45 Toastmasters Fall Conference on November 3-5.

District 45 includes all of
Vermont, New Hampshire, & Maine in the USA, and all of
New Brunswick, Prince Edward Island, & Nova Scotia in Canada.

Sad to say, but this will be the last District 45 Fall Conference. Toastmasters International has called for Districts to only have one annual conference to be held in the Spring, starting next year. For the last Fall Conference, though, this was a blast!

The weekend conference was hosted at the Lake Morey Resort in Fairlee, Vermont.

The ground-floor back-side of the building provided a vastly spacious dining room for breakfasts, with spectacular views of Lake Morey.

Stepping outside the Breakfast Dining Room, the panoramic view of Lake Morey was positively gorgeous.

I shared a room with two other gentlemen, my mentor Joe Grondin and David Cormier. This room, which overlooked the Main Entrance, was extremely huge!

The functions throughout the weekend were such fun as well as productive, especially sitting at table with good friends.

Some fantastic educational workshops were also given throughout the weekend. My mentor, and brand new Accredited Speaker, Joe Grondin, presented what was (in my opinion) one of the best workshops of the whole event, titled,
Goal Setting and Planning – “I DID IT!”.

I had the joy and pleasure of coaching a fellow member from one of my own clubs through this last and final cycle, Priscilla Hansen Mahoney. So exciting, she made/won/earned it all the way up to winning 2nd Place in the Humorous Speech Contest. I was (and am) of the personal opinion that the “real competitive contest” among the contestants was a neck-and-neck horse race between those “Top-Two.” (Please see the separate blog post I made regarding, Priscilla wins 2nd at District!)

The other last & final Fall contest was conducted on Sunday morning. In my opinion, my friend from New Hampshire, Manasi Kadade, stood way ahead and showed us all how a truly Excellent Evaluation is done. As genuinely well-done as the other contestants’ evaluations were, I was of the perspective that there really was never a doubt that she had won 1st Place.

We were fortunate enough to have not one but two powerful presentations from VIP guest speaker,
Lance Miller, the 2005 World Champion of Public Speaking (WCPS).

At the Awards Ceremony, I received two awards.

The first award was for sponsoring at least 5 or more new Toastmaster members throughout the previous fiscal year (July 1, 2016 – June 30, 2017).

Actually, I had sponsored 15 new members of the previous year. As no on else in District 45 Toastmasters had sponsored as many as that number, that qualified me to earn the Allen E. Seavey Memorial Membership award. This was not the first I earned this presitigious award, nor was it the second time. After earning for 2012 (18 new members) and for 2016 (16 new members), this last year (2017) is now the third time since I joined Toastmasters in 2010 that I have won (earned) this award.

I admit that I was rather stoked to have actually been able to earn this award for the third time.

Truly, this last and final District 45 Toastmasters Fall Conference was full of fun and education.

Best of all, seeing old friends is one of the best reasons for attending the Distirct 45 Toastmasters Conferences.

As a fellow pursuer of excellence, I enjoyed and was truly educated by the public presentations by – and the private conversations with – the 2005 World Champion of Public Speaking, Lance Miller. Having access to such proven expertise definitely makes attending the Conference effectively “pay for itself.”

Most of all, for me, the biggest value was having live (non-skype) time to learn directly from my amazing mentor, Accredited Speaker, Joe Grondin.

What more can be said? Not much else, really. This was a fantastic and productive time at the last and final District 45 Toastmasters Fall Conference, at the Lake Morey Resort, in Fairlee, Vermont, United States, on November 3-5, 2017.