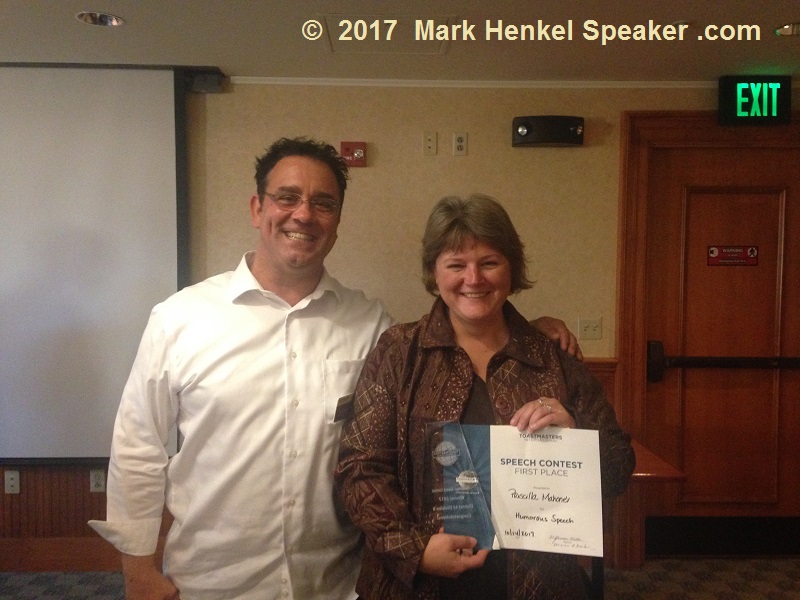 By the Autumn of 2017, World Headquarters of Toastmasters International had made a new requirement that all Districts must reduce from two Conferences down to only one District Conference each year. Hence, at the District 45 Fall Conference, on November 3-5, 2017, at Lake Morey Resort, in Fairlee, VT, US, the District 45 Toastmasters Humorous Speech Contest was the last and final year that this particular contest cycle will ever happen in the District.

For this last and final year of the Humorous Speech Contest cycle, I chose not to compete.

The reason was easy. I wanted to, instead, focus on supporting and coaching a fellow Toastmaster and friend, Priscilla Hansen Mahoney.

Priscilla had put together a great and very funny speech, titled, “Sink or Swim.” With this speech, she moved beyond the local club to win 1st Place at the Area 6 level contest on September 26, 2017, in Portland, Maine.

Two and a half weeks later, on October 14, 2017, in Auburn, Maine, after making the already-great speech even better, Priscilla won 1st Place at the Division B level contest.

Priscilla then took the next three weeks to make the speech even better.

On Saturday, November 4, 2017, at the District 45 Humorous Speech Contest, she gave a fun, funny, and inspiring presentation of “Sink or Swim.”

She was up against a lot of good humorous speeches from some very capable fellow contestants.

In my opinion, the contest was really a neck-and-neck horse race of only the “Top Two,” as the most amazing standouts:

Priscilla Hansen Mahoney’s “Sink or Swim,”
vs.
Talia Steeve’s “Pants on the Ground, Mama Would Be So Proud.”

I fully enjoyed eating formal meals with both of these outstanding ladies during the weekend events, making new friends with Talia! She is a great young lady with a great attitude.

Priscilla and Talia, both of these fantastic women had also become fast friends too!

Ultimately, even in a close race like this one, there can only be one 1st Place – which Talia Steeves won.

She did such an awesome job throughout this whole contest cycle.

For me, it has been both a pleasure and an honor to have been even a small part of her outstanding journey to the 2nd Place victory at the very last Humorous Speech Contest of District 45 Toastmasters.

When Priscilla online-posts the video of her speech (which she asked me to record), I will post/embed it here too.
EDIT UPDATE, 1/31/2018:   Here is the video I recorded/engineered of her great speech that Priscilla has youtube-posted: